Carnival is a very important celebration in Ibiza. As in many southern Catholic countries, it is celebrated for five days around the first Sunday of Lent. The Sunday and the Wednesday after the carnival weekend are the best days to visit Ibiza Town. A carnival parade sets off on Sunday at the end of the morning. Check the route carefully, because it would be a shame if you were standing in the wrong street. Last year, the parade started at the port, in the direction of Avenida D’Isidor Macabich, and went back via Avenida d’Espanya to finally stop at Vara de Rey. And, contrary to what is usually the case in Ibiza, this parade last year set off at exactly the time that was announced! In the Netherlands, Carnival is the feast of “foolishness, ridicule and exuberance”, and we prefer to do the polonaise from pub to pub. But, in Ibiza, Carnival has more of a tropical atmosphere, and it reminds us more of the samba parade in Rio de Janeiro or of the costumes at the Carnival in Venice. But, of course, everything is a little smaller. We were pleasantly surprised last year by the number of young, talented groups, so big and colourful. Often these are associations, ballet groups and dance groups that are showing off their skills. Many seamstresses work for months to make all these costumes. Even the make-up and face paint, hair braids and accessories, everything matches perfectly. There is always live music, percussion and a lot of popular music. The parade ended last year at the Vara de Rey, where a huge paella was prepared and plates of it could be bought for only 2 euros per plate. We keep our fingers crossed for a nice, warm and sunny day this year, because during this last week, the weather in Ibiza has not really been suitable for walking around the city in a thong and a feather headdress. Before Ash Wednesday, you have to figure out which association does the parade in which part of the city. A few years ago, it was the Carnival Association of the old city, probably with a high budget, and it was wonderfully organised. The members were all dressed in black baroque costumes, including high powdered wigs and black veils. The make-up for both women and men was really great! The members of the Association, including their children in baroque mini-version costumes, walked along the road pretending to be crying. Then, a dramatic death march started. There were men with tall hats and tailcoats walking behind the drum band, carrying a stretcher with a large sardine on it, made of silver material, and they were followed by stilt-walkers. The sardine was ritually burned at the port, and real grilled sardines were distributed to the spectators.

If you’re in the city on that Wednesday night and don’t know about this event, you won’t believe your eyes! We were quite startled by all that dramatic violence, but in the end we understood what was going on. And eating those sardines is a bit like “haringhappen” in the Dutch areas of Brabant and Limburg, after you have been to church for your ash cross.

So… If the sun is shining next weekend and you’re on the island, then you should not miss the carnival! 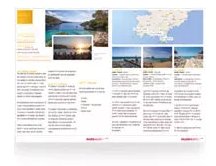